The Blue Sky Cellar has returned! See some of our major projects for now, but come back later and see exclusive videos, pictures, shelved concepts, and more!

The Miniature Disneyland Resort now has it's own official Facebook page! Be sure to "LIKE" us on there!

One thing we can't let the Miniature Disneyland Resort do is get stale. We always want to have our guests return with something new to see. The 2011-2013 timeline is a big one. We started in July 2011 when our second gate opened right next door to Disneyland Park: Disney California Adventure. Massive projects to improve both parks were already well underway in August and in October we moved the Miniature Disneyland Resort to a much higher table. To bring more Disneyland charm to our beloved first gate, it took 8 long months of reconstruction. On June 3, 2012, our Phase I plans for Disneyland Park were completed.

Right after, we expanded Disney California Adventure and The Disney District to begin another ambitious project. In 2011 we announced a third gate will be opening right next door to Disneyland Park: EPCOT. EPCOT will reflect many of our own original ideas and the ideas that are of Walt Disney when he imagined EPCOT being a city. Then earlier this year we shut down one of Disneyland Park's ever popular areas for an exciting refurbishment: Tomorrowland. Tomorrowland will reflect a lot of the original 2055 Tomorrowland plans for Disneyland in the 1990s, the "New Tomorrowland" at Magic Kingdom in the Walt Disney World Resort, and of course, our own ideas.

To get an idea of what most of our plans are, here's a list (in no particular order)

The exciting three years of new dreams is wrapping up! Not much more time is left. Get ready to celebrate an all new reimagined Miniature Disneyland Resort!

New Adventures on Their Way! Disney California Adventure has greatly expanded! Giving more rooms to existing areas and more room for new areas, the Park will be done in 2013. However, some of our guests just can't wait that long! By July 16, 2012, the anniversary of the park, new adventures will have arrived! In no particular order, here is a list of the exciting new experiences on their way for Disney California Adventure.

We hope to see you there when these new attractions arrive! More info soon.
Stay tuned!

A Sneak Peek at the Reimagined Matterhorn Bobsleds! 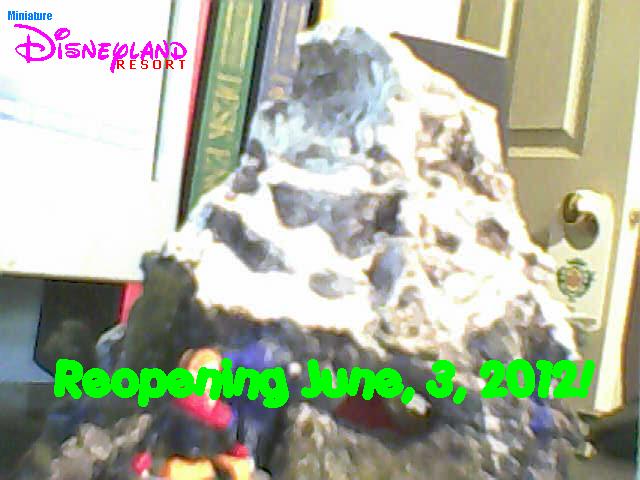 Since February 2, 2012, we have been working on the newly reimagined Matterhorn Bobsleds. The structure is the same, however new things have been built around it. The rockwork was originally crumbled up paper with a little bit of caulking to give it a rocky look. We have since taken all that off (see video below) and added a very realistic rockwork. Inside will also be a detailed scene showing the fierce Yeti and more! The Matterhorn is almost ready to reopen this Summer for Storybook Summer. Be there on June 3, 2012 for it's amazing reopening!

Yesterday, the holidays ended at the Miniature Disneyland Resort. Decorations gone up in September and again in November. It was a long 4 months, but it was very fun! The two highlights of Christmas and Halloween Time were the dazzling firework shows. Halloween featured a relatively short Ghost Galaxy firework show while Christmas featured an extravagant Christmas spectacular! You can watch Ghost Galaxy in our videos section. Now, we would like to present to you: 'Looks Like Christmas!

Be sure to tune in Sunday, January 1, 2012 as we kick off our new promotion through March 21: Soundsational New Year!

We have a brand new section on our website: The Blue Sky Cellar! Check it out for news on upcoming attractions and shows. Also, we have a neat little "Shelved Concepts" section for all of you who are interested in some of the attractions that couldn't find their way into the parks. Really interesting stuff! Also, be sure to tune in on Christmas Day as we will be presenting our new Christmas Firework Spectacular: "Looks Like Christmas"! Here you can find updates on the parks and more! Visit the blog for updates, history facts, and other good stuff!

Have a magical day!

The Refurbishment for the Matterhorn Bobsleds Has Begun!
759 views - 0 comments

This fan site is neither affiliated with nor maintained by the Walt Disney Company. Â©2011-2012

Start a Free Blog at Webs.com